How can we change our circumstances?

"It is as it is" - accept circumstances that we cannot change 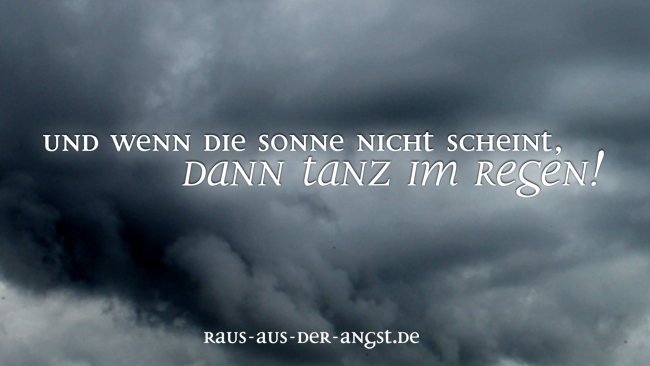 Every now and then we are all confronted in our life with circumstances that we do not like, that do not correspond to our ideas, that thwart our plans, but with which we have to come to terms.

I am a believer in the theory that our thoughts shape our reality, I don't believe in fate. But no matter how much we make the right, positive, constructive thoughts, how much we practice positive thinking, whether it is raining or the sun is shining, we cannot influence that.

Unhealthy "would have, if" thoughts

Let's assume that as a stressed anxiety patient, after months of fear of traveling by train, we decided to tackle our first exposure today - and then due to a spontaneous strike, disruptions in operations or temperatures outside the range for our modern German rail transport are designed - approx. 14 ° C-20 ° C - suddenly no draft.

To reproach yourself now, to see the attempt as a failure, to see the fear as so overpowering that it does not let go on winding paths to wipe us out, is anything but beneficial to mental health. It went stupid, but it is what it is!

Accept circumstances and make the best of it!

In such a situation, it is much more productive to accept the circumstances, analyze them and then make the best of them. Based on the example with the planned first train journey after months of fear, one could instead consider which fear management tasks one can tackle when one is already at the station anyway.

Perhaps you are also afraid of larger crowds? Before long stays in public places, or the like? Why not use the way to the train station instead of seeing it as a failure to treat yourself to a cappuccino in a café in the train station? You might even kill two birds with one stone: Treat yourself to a reward for trying and at the same time work on the fear of people and public places?

Turning negative into positive - THAT is the power of positive thinking

To act in such a way, to make the best of the external circumstances, that is a lived form of positive thinking! Nothing abstract, complex, but a simple adaptation of everyday thinking and behavior that strengthens our mental health and peace of mind with each repetition. It is not difficult to understand why we can go through life more satisfied and balanced with such a mindset than if we waste our time getting angry about things we cannot change.

An example from personal practice: when the witch shoots ...

While I am putting these lines on paper or in WordPress, I am sitting in front of the notebook with my back arched in pain. A lumbago with the resulting painful scoliosis temporarily sets very narrow limits as far as the organization of my everyday life is concerned.

"Pain Scoliosis"? If you've ever had one, you don't have to explain the term to everyone else: instead of running straight when viewed from the back, the spine makes cheerful curves, looks like an S from behind, the hips are crooked, and you inevitably ask yourself since when witches shoot bazookas instead of arrows. Extremely painful and sometimes very persistent.

Accept instead of quarreling

So for a good 10 days I have been struggling with the pain and can now move normally again within certain limits, but there is still no buffer to cope with even the smallest unusual movement. Despite all conceivable measures, the healing can only be influenced up to a certain point. A certain amount of time is necessary, especially for the last bit of relaxation, in order to be able to cope with unfamiliar movements, vibrations, long sitting at the desk or just driving on an average Berlin street with potholes in which a Smart could disappear.

Now I could despair of the situation and, as a proven workaholic, be annoyed around the clock because of the work in my office at TONERDUMPING. I admit: I have that too! Up to the point where "It is as it is" appeared in glowing letters before the inner eye.

But I can also just make the best of it: reading, which otherwise often doesn't have the time. Educate myself, for example with instructional videos at video2brain. Work from home within the scope of my possibilities. Use the time of heat therapy for PMR at the same time, and so on and so forth ...

Conclusion: take it and make the best of it

No matter what our plans, no matter what comes in between, there is always a possibility to make the best of the given circumstances. And those who consistently apply this thinking will definitely benefit from it in many ways in everyday life, feeling better, achieving more and brooding less. Try out!