Who won the battle of Mogadishu

Somalia - where the US lost the war twice.

Mogadishu in December 1992. Thousands of US soldiers occupy the capital of Somalia. Their goal: On the one hand, the US image, which was somewhat battered by the Gulf War, could be improved through humanitarian action. On the other hand, Somalia has a neighbor, Sudan, which was already considered a rogue state back then and the - temporary - home of a man whose name would later become world-famous: Osama Bin Laden. Somalia should not become another haven for terrorists and the victory of the highly armed US army in the war against the undisciplined troops of the warlords is considered certain. 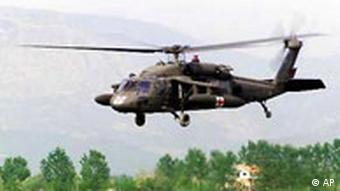 But the population's reaction is different than expected. Instead of showing relief and joy, most Somalis reject the presence of US soldiers as invaders and unbelieving occupiers. Above all, the warlord Mohammed Aidid manages to stir up the Somalis. The American soldiers are exposed to constant military attacks and soon only rely on missions in the air with the Black Hawk-type helicopters, which are considered to be safe.

On October 3, 1993, elite units are said to take close confidants of the warlord Aidid prisoner. The soldiers are flown with Black Hawks, but they do not even reach their destination. Fighters from Aidid's troops manage to shoot down two of the helicopters. The image of a dead soldier who is being dragged half-naked by a raging mob through the streets of Mogadishu goes around the world. And the Pentagon is wondering: How did this happen?

"At the same time, Osama bin Laden is sitting in Khartoum, the capital of Sudan. From there he plans the fight against US troops in Somalia with the help of his chief strategist Mohammed Attef, who was in Mogadishu." That says Ralph Sina, longtime Africa correspondent and expert on the development of terror in Africa. The aim of the action, according to Sina: "We are showing that the Americans are vulnerable. Attef and his liaison officers from the radical Islamic terrorist group Al Ittihad Al Islamiya (Unity of Islam) are showing the Aidid men how to operate a helicopter shoots. " 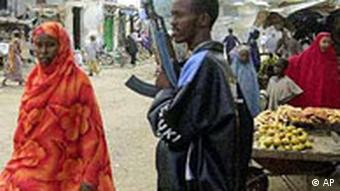 Until the Islamic militia marched in, many Somalis only dared go out armed

The humanitarian mission with the supposed guarantee of military success turns into a disaster. Five months after the attack, the last American soldier left Somalia. The country is left to its own devices.

The civil war went on for years. The clans divide Mogadishu, within the district ruled by their own clan it is reasonably certain that whoever crosses these borders must also fear for his life. The infrastructure collapses completely, the port and airport are closed, support for civilians is only offered by the few aid organizations that have remained in the country. In 2002 the international community presented a transitional government for Somalia.

But the interim president and former warlord Abdullah Yussef does not want to reside in Mogadishu, it is too unsafe for him there. Only in 2005 did the members of the government agree to meet in the provincial town of Baido. And their influence in this place remains limited, also because the government is seen as a puppet of the hated neighbor Ethiopia 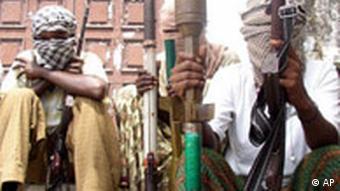 Instead, a new power factor is developing. Similar to the Taliban in Afghanistan, a troop of radical Islamists - called the Union of Islamic Courts - is rushing from victory to victory and soon dominates large parts of the country. Allegedly it is supported by Al Qaeda, but there is no evidence of this. The Islamic courts are welcomed by parts of the population, especially the middle class. They ensure security and less corruption. However, the USA sees the danger of a radical Islamist Somalia and is therefore supporting a group of warlords called the "Coalition Against Terror" in the fight against the Islamic courts with weapons and money. "This is a kind of proxy war between the United States and Al Qaeda," said journalist Wim Dohrenbusch, describing the situation in the summer of 2006. "And if Mogadishu falls now, the United States will have lost a war in Somalia for the second time."

Advance of the Islamists

The battle for the capital leads to the toughest skirmishes in years, after a few weeks Mogadishu is in the hands of the Islamic courts. They continue their winning streak, conquer other larger cities and finally the powerless interim government signs a ceasefire agreement with them. In autumn 2006, the Islamists took control of almost the entire country, with clan chiefs only able to hold out in the northern area. In Mogadishu, the Islamic courts are even doing construction work, the port and airport are being made operational again and reopened. From the point of view of neighboring countries and the USA, there is a great danger that Somalia will above all become a safe haven for terrorists. In addition, the largely uncontrolled borders with Kenya and Ethiopia could be used as gateways for terrorist actions.

In September 2006 the African Union therefore decided that it wanted to send peace troops to Somalia. They are supposed to support the transitional government. But the Islamic courts have already announced that they will consider the soldiers of the African Union as invaders - and fight them.