Geronimo was a murderer

Indian was the code word for bin Laden: chief, not terrorist leader

The name of the resistant Indian chief Geronimo was a code word for Osama bin Laden. Geronimo is a symbol of resistance and reconciliation. 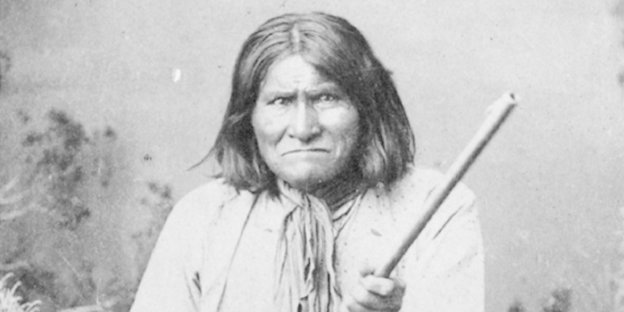 BERLIN taz | "What the hell were they thinking?" This is how angry begins the comment of the Shawnee / Lenape Indian, book author and institute founder Steven Newcomb. He is stunned that the first black president of the United States of all people was able to allow the name of the most famous resistance Indian chief, the Chiricahua-Apache Geronimo, to become the code word for Al-Qaeda boss Osama bin Laden last weekend.

Newcomb is not alone in this. Representatives of almost all tribes have now turned indignant to the White House and demand an apology. No wonder, since Geronimo, the chief who died in 1909, is both a symbol of the resistance against the genocide of the American natives and a symbol of reconciliation. Now, of all people, naming bin Laden after him is seen by the associations as a sign that Indians are still viewed as enemies, not US citizens.

In the debate, one or the other historian tries to compare Geronimo with bin Laden, at least as a fighter against the US government. That lags a lot. Geronimo saw his parents and 400 other Apaches killed by white scalp hunters in 1837 at the age of eight. When he was 29, his wife, three children, and adoptive mother were killed by Mexican troops. Only then did he take up the armed struggle - openly, hard and against a superior force of opponents.

There are countless heroic legends around this time, when Geronimo was pursued by up to 5,000 US soldiers and escaped. With 36 remaining comrades-in-arms, he surrendered to the US troops in 1886. In 1909, meanwhile converted to Christianity, he died. President Roosevelt had invited him in 1905 to take part in the inauguration parade.

Geronimo - and thus also a recognition of the legitimacy of the Indian resistance - seemed to belong firmly in the canon of American historiography. Until last weekend when a thoughtless military man came up with a stupid idea.