Trump dreams of a white Christmas

Bicultural Urbanite Luke
The dream of a white Christmas

One of my nicest impressions as an Australian expat in Germany was the snowy Christmas season, a Disney-like joy that global warming seems to be eradicating from modern life in Berlin.

It's that time again: The temperatures have dropped, the days are short and the Christmas lights are shining all over the city. In this classic seasonal picture, however, one motif is missing: snow. Radiant, heartwarming snow. Admittedly, the constantly moody weatherman has never been able to guarantee the White Christmas that Bing Crosby literally wishes for in his hit song from 1942. But in the midst of our modern climate crisis, Crosby's wistfully sung lyrics take on a whole new meaning.

My love for snow has long been a point of friction among my German friends. What is a rustic novelty for an Australian expat, which makes the bitter cold of the Berlin winters bearable, is just a common annoyance for Germans, which leads to dirty streets and constant slipping. At the end of the day, Germans grew up with stuff that falls out of the sky as usual every year.

I remember a snowy evening with a German friend in my first winter of 2010/11 when the Berliner was puzzled by my enchantment with what she basically saw as dirty frozen rain. She just couldn't imagine that year in and year out snow wasn't a normal, if a little unpleasant, part of life.

Nine years later, and snow has become something special for everyone in Berlin. According to worldweatheronline.com, the climax of the cold season in Berlin in January 2010 brought 22 days of snowfall with it, with an average of 8.6 centimeters. Last year it only snowed 8 days in the same period, with a meager average of 1.6 centimeters. 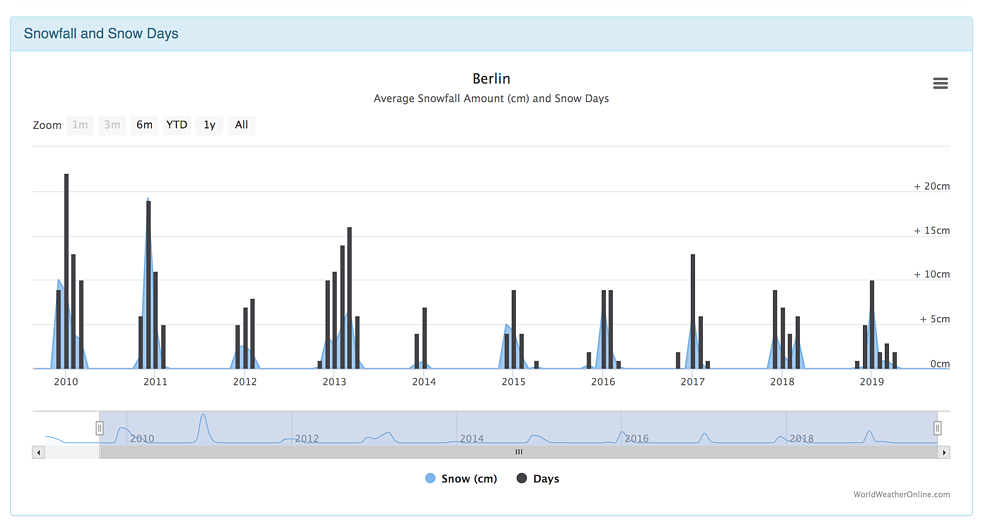 The fall in snowfall in Berlin over the past 10 years has been dramatic | © World Weather Online, but this felt even less in the inner city. The few lonely flakes that occasionally appeared and floated from the sky mostly evaporated before they even had a chance to touch the ground. And now that December is already drawing to a close, it looks as if the streets of the German capital will remain incredibly bare again.

Admittedly, I'm not an expert on climate change, but unless you're a member of Donald Trump's cabinet, you will likely view this phenomenon as an alarming acceleration in global warming. An article in Deutsche Welle last year explains how “disproportionately warm” temperatures in Germany actually lead to less snowfall across the country. 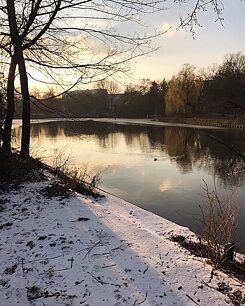 It is frightening to suspect that the days of Berlin, which regularly turn into a radiant winter wonderland - and the inimitable silence of the neighborhood that comes from freshly fallen snow - feel like a distant memory.

The speed of this change, since my first winters here, fills me with nostalgic thoughts of frostier times, and frankly, it also scares me a little. If things continue like this, the local website predicts, Berlin will be “as hot as Australia” for the next 30 years - a prospect that makes dreaming of a White Christmas seem more like waiting for a Christmas miracle.

Luke Troynar was born in Melbourne and is a part-time word smith, part-time musician and a more or less aspiring member of the workforce. He lives in Berlin, where he alternately flirts with an academic career, acts as the frontman of his dark pop duo 'Bad Tropes', tinkers on his satirical blog 'Pathetic Inversions' and tries his hand at working as a freelance writer.