How do I ask someone about their size

True Greatness: How Do You Treat Others?

True greatness is not revealed in status. True greatness is demonstrated by dealing with other people. However, not about how someone treats people with a high social status, let alone how they are courted. It reveals itself by how someone supposedly deals with the little people bypasses. Those who can thank you for it, but from whom you can certainly not expect adequate consideration. Admittedly, the approach is reminiscent of the morally acidic principle of giving that makes one more blessed than receiving. But there is more to it: Anyone who looks over and through the status of a person not only recognizes his true counterpart, but also himself ... 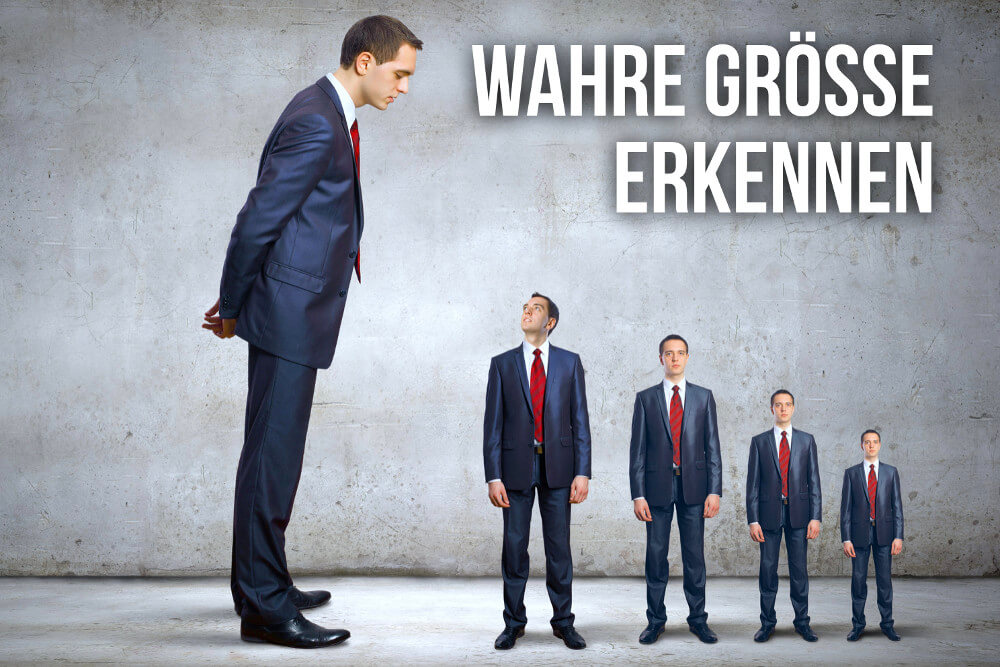 Why true greatness is desirable

Status and power are not property but loans. Not only do they elevate us, they also oblige us. Anyone who realizes and internalizes this not only makes this world a better place, they also protect themselves from erroneous vanities - and these are, as is well known, the preliminary stage before the fall. True (human) greatness, on the other hand ...

True, greatness is not a quality that we acquire or learn and then possess. Greatness has to be lived. Every day. Quite a few succumb to the mistake that they grow larger by making others small. Fatal! Such a person reveals at best a low self-esteem and a veritable profile neurosis.

Self-worth and greatness are not relative Properties, but absolutely. You don't gain more by taking away the size of others, grudging them with grudges or defending your own worth in order to look better. These are all signs of weakness. Those who are really big let others grow or enjoy their size. True greatness is always directed towards the other. But it never fulfills an end in itself.

Characteristics: How true greatness is revealed

So the question of conscience is: How do you treat other people - especially those you don't look up to? Sure, you don't have to answer the question. Especially not us. Who are we already? But it may be worth a suggestion. In any case, the following three wonderful anecdotes and lessons (whether they are true or urban legends) teach a lot about opportunity, true humility, and genuine philanthropy:

During the first few weeks at the US university, the professor handed out a questionnaire to his students. It was a kind of quiz about her motivation to study here, mixed with a few questions about the university itself. Only the last question was out of the ordinary, it was: "What is the name of the woman by first name who regularly cleans this lecture hall?"

In fact, hardly anyone could answer the question. Most of the students had seen the cleaning lady a few times and knew that she was around 50, had dark hair and a Spanish accent. But nobody knew her name. As well as? Nobody had exchanged a word with her.

So most of them left the answer field for this question blank (some at least tried chutzpah and wrote down an advised name). When everyone submitted the questionnaire, however, one of the students took heart and asked the professor directly about this question: “Will this question have an impact on the overall grade at the end of the semester?” He wanted to know. "Absolutely," replied the professor and also explained why:

“You will meet a bunch of people in your career. And all of them will be very important. And I really mean a-l-l-e! Every single one of them deserves your attention, your attention - but at least a smile. "

The student never forgot this lesson - as well as the name of the cleaning lady, about which he asked her shortly afterwards. Her name was Dorothy.

There are different professions. Some have a higher status than others. And yet we all need not only the senior doctor, but also the nurse. Greatness is proven by those who let others have their value and recognize your achievements - regardless of payment or status. Beauty, intelligence, talent - they are all distributed differently. No reason to imagine anything on it. On the contrary: constant comparisons not only make us dissatisfied, but also jealous, small (and ugly).

It was in the sixties of the last century and very late that evening. The hands of the clock were at half past ten and it was pouring rain. An elderly African-American woman stood on the side of the Alabama Highway, visibly struggling with the raging rainstorm. Her car was in the ditch and couldn't go any further. She herself was in a great hurry, was desperate and already soaked.

So she stood on the side of the road and tried to stop the nearest car to ask the driver for a lift. Most of the cars just kept going. Only a young white man, apparently completely indifferent to the racial resentment of the day, stopped. He immediately took care of the old lady, gave her his jacket, packed her in his warm car and took you to a taxi so she could continue her journey. The woman was really in a hurry, but at least she wrote down his address.

About seven days passed when there was a surprising knock on the young man's door. To his amazement, two suppliers carried a huge TV board with a television into his living room. There was a small piece of paper attached to it that read: “Thank you very much for helping me on the highway the other night. The rain had soaked not only my clothes but also my faith. But then you came! Thanks to you, I was able to help my husband on his deathbed in time before he went home. God bless you for your selfless act.

Our society is - unfortunately - becoming increasingly individual and thus also more selfish. Everyone only pays attention to themselves and their own advantage. If we are already talking about a favor or selflessness, then this is only possible if one emphasizes at the same time that it will be worthwhile and pay off. That, of course, is also the moral of the above story. Superficial! In fact, the lesson shows selflessness without calculation. A good deed without profit thinking. Without a bonus. That it existed anyway is a nice punchline, but not the reason! True greatness acts without the intention of exchange or consideration. Just as generosity comes from an impulse of love and not from a cash book. This is difficult for some because there is no applause, because the good deed remains undetected and unrewarded. They think. But not true. In truth, it often gives great fulfillment and joy.

At the time when ice cream was still a few cents, a little boy, not much older than ten, came into a coffee shop and sat down at a table.

After a while the waitress came to his table and brought him a glass of free water (which was also common at the time). "How much does an ice cream sundae cost for you?" Asked the boy. "25 cents," replied the waitress. The little boy rummaged in his pockets and pulled out some small coins, which he now carefully counted.

He thought for a while, then asked again: “And how much does a small water ice cream cost?” Meanwhile other guests had also come to the coffee shop and were becoming increasingly impatient. The waitress replied to the boy accordingly harshly: “20 cents! Do you want a water ice now? "

The boy counted his coins again and finally said yes. The waitress hurried, brought the boy the ice cream and the bill, and disappeared. The boy ate his ice cream, put all his coins on the table, and left.

When the waitress wanted to clear his table later, she looked at the bill and the coins and began to cry: there was exactly 25 cents on the table. The boy had calculated exactly that he would have to do without the delicious ice cream sundae in order to tip the waitress.

"But I have a right to it!" - Claims thinking is dangerous. We may have a right to - strike back when we have been hurt; To put things right; to prove to the other that he / she is wrong; always to demand the agreed consideration ... What becomes apparent here on closer inspection, however, is a person full of fear: fear of coming up short; Fear of being taken advantage of; Fear of getting less than what he / she thinks he / she deserves. True greatness is shown here by consciously doing without. Being able to leave things where they are - for the love of peace. To let the air out of your own ego instead of puffing yourself up and showing serenity. Precisely because you do NOT have to insist on your right always and every time or to make yourself the center of attention.

Those who know their size leave theirs to others

As the saying goes: “The way someone treats you says what kind of person they are - not who you are!” Or as another bon mot puts it: “As long as you try to impress others, you are you are not convinced of yourself. As long as you try to be better than others, you doubt your worth. As long as you try to make yourself bigger by making others small, you have doubts about your size. ”Those who are at peace do not need to prove anything to anyone. Those who know their worth do not need confirmation. Those who see their size let others have theirs. This is also illustrated by the little picture story and parable in the following video (be sure to check it out!):