What attack helicopters does India have

Narrow fuselage, the crew seats staggered one behind the other, a movable weapon under the bow and small auxiliary wings for missiles and guided missiles - when the Bell Model 209 took off for its first flight in September 1965, a new type of attack helicopter was born, which the US Army for the mission in Vietnam was urgently needed. Deliveries of the AH-1G Cobra began in 1967, and more than 50 years later the US helicopter manufacturer has a further development of this legendary model in its range.

However, the AH-1Z Viper no longer weighs 4300, but 8390 kilograms, has an engine output that has increased from 820 to 2680 kilowatts and, instead of the typical two-blade rotor, a bearingless four-blade rotor with blades made of composite materials. The AH-1Z was developed in the 1990s for the loyal Cobra customer US Marine Corps. He received the first machines from the series in 2007 and plans to purchase 189 Vipers. So far the only export customer is Pakistan, which received its first AH-1Z in August.

Following the alleged interim solution AH-1 Cobra, the US Army had a very complex weapon system developed with the Lockheed AH-56 Cheyenne, which was flown in September 1967, but it turned out to be impractical. After a comparison flight with the Bell YAH-63, the YAH-64 from Hughes Helicopters (now Boeing) came into play. Deliveries began in 1981 with three pre-production models of the AH-64A Apache, and since then the model has gone through several stages of development. The AH-64E is currently being manufactured in Mesa, Arizona, and has received completely modernized avionics. With more powerful engines and new rotor blades, performance was also gained again despite the increase in weight. The Apache went to eleven countries over the years, from the UK to Japan to Egypt and Saudi Arabia. The latest customer is India, which plans to purchase 22 helicopters. Meanwhile, Great Britain is following the US Army trend and switching to the latest generation.

Due to the American experience in the Vietnam War, other countries also became aware of the possible uses of attack helicopters. The Russian armed forces initially pursued a different concept with the Mil Mi-24 (first flight: September 1969). Behind the two-man crew, which was housed in a typical tandem arrangement, there was a cabin for the transport of up to eight soldiers. This solution is apparently still attractive today, because the modernized Mi-35M variant for export is still in production at Rostvertol. The youngest customers include countries such as Iraq, Nigeria, Kazakhstan, Pakistan and Mali.

Mi-28 and Ka-52 under construction

Over a decade after the Mi-24, Mil then also designed a “real” attack helicopter. The heavily armored Mi-28 took off for the first time in November 1982, but the turmoil after the collapse of the Soviet Union delayed series production considerably. It was not until January 2008 that the first two Mi-28N (N for Night Hunter) were delivered to the test center of the Russian Air Force in Torzhok. In the meantime, around 200 copies have been ordered, including the Mi-28UB with double control. Rostvertol has delivered around 100 helicopters. So far, export customers have been Iraq and Algeria.

The hesitant production decision for the Mi-28 is also related to the fact that there is a strong local competitor in the form of the Kamow Ka-50 or the Ka-52 developed from it, which the state authorities have long regarded as the more promising model. The Ka-50 / Ka-52 program was also in a deep slumber for a long time, until the necessary funds began to flow again in 2006. From 2009, the Arsenyev plant began delivering the attack helicopter, which is characterized by its side-by-side seats for the crew. Egypt was won as an export customer; it receives 46 Ka-52s.

After the superpowers, Europe also entered the attack helicopter business in the late 1970s. The pioneer was Agusta (now Leonardo Helicopters) in Italy with the A129 Mangusta. Although it is significantly lighter than an Apache, it comes with all the systems in terms of equipment. The number of units for the Italian army remained modest, and for a long time there was no success in export either. Only an agreement with Turkey led to the development and construction of the improved version T129 (first flight: September 2009); it is built at TAI.

France and Germany then followed in the late 1980s with the joint development of the Tiger / Tigre, which took off on its maiden flight on April 27, 1991. The development proved to be extremely slow, and it was not until April 2005 that the Army Aviators received their first copy. The number of units was reduced several times, so that the only remaining combat helicopter regiment has to make do with 40 machines. While Germany chose a UHT (support helicopter) variant of the tiger, France, Australia and Spain received a model with a cannon in the bow.

In 1984, South Africa, affected by arms embargoes, began developing an attack helicopter. The Rooivalk flew for the first time in February 1990, but ultimately more than a dozen machines were not built. Export efforts were also unsuccessful. Kawasaki is not thinking about exports with its OH-1. Although this has the typical attack helicopter look, it is more likely to be classified as an observation helicopter. Since the first flight in August 1996, around 50 machines have been built in typical Japanese small series production.

India already has bigger plans and plans to procure 179 Light Combat Helicopters (LCH). The LCH was developed on the basis of the Dhruv transport helicopter and took off for the first time in March 2010. The production of the first 15 machines in Bengaluru started in August 2017. 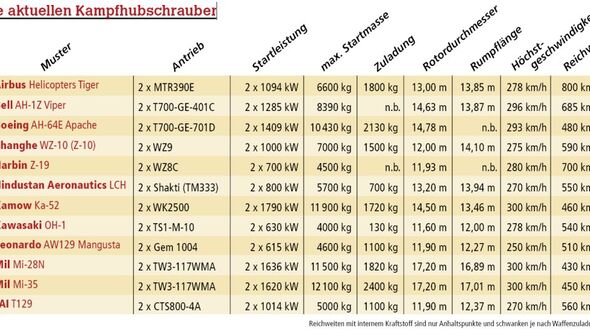 That leaves China, which has also developed two attack helicopters as part of the comprehensive modernization of its armed forces. Multiple attempts to import samples such as the Mi-28 or Ka-52 from Russia had failed, but it is believed that Kamow in particular provided important support for the Z-10 (sometimes also known as the WZ-10). A prototype of the Z-10 is said to have flown for the first time at the end of 2003. Regular troop service should have started in 2012. In the meantime around 100 Z-10s have been built.

The Z-10 is complemented by the Z-19, a lighter pattern that probably uses numerous components of the Z-9 - which in turn is a copy of the AS365 Dauphin. Accordingly, the program was implemented much faster. After the first flight in 2010, over 80 machines have now been built. There is also an export variant, the Z-19E.