Aspies-autistic can be addicting thinkers

The WTAS (Scientific Conference on Autism Spectrum) took place from March 10th to 11th, 2016, this time on the premises of the University of Freiburg.

The overarching topic of this year's conference was:

 Development, research and application of therapeutic methods for autistic people.

This topic is of particular relevance this year:

The second part of the new interdisciplinary S3 guidelines "Autism Spectrum Disorders in Childhood, Adolescence, and Adulthood"Which deals with the topic of" therapy ". Aspies e.V. also takes part in the discussion (see, among others: [http://aspies.de/selbsthilfeforum/ 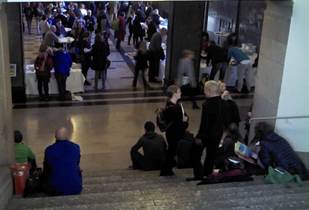 Aspies e.V. was also present at the WTAS 2016 with flyers and information sheets.

It was gratifying to see how many prospective trainees were looking to talk to us. Future psychotherapists and social pedagogues wanted to know what support offers autistic people would like for themselves or what one should pay attention to when one has autistic adults as a clientele in therapy.

Here is an overview of the topics at this year's WTAS:

The workshops: This was mainly about the presentation of various therapy methods

W 4 dealt with the possibilities of psychotherapy for autistic adults. Prof. Dr. Dr. Vogeley briefly presented the group therapy program GATE, which was developed at his university. Then very general problems were discussed. For example, psychotherapies also work through the non-verbal emanation of empathy and appreciation from the therapist, which is difficult for autistic patients.

When collecting the topics to be discussed, the workshop participants mentioned “compensation” and “identity” particularly often. To what extent is compensation possible or even sensible? How can one adapt the environment instead?

In another workshop, W 6, FETASS (“Freiburg Parent Training for Autism - Spectrum - Disorders”) was presented. We find this concept very problematic as it contains many elements of ABA and also works with negative amplifiers.

Lectures and posters: Here, too, the main focus was on therapeutic methods

In the children and youth sector, the main focus was on early intervention and support. 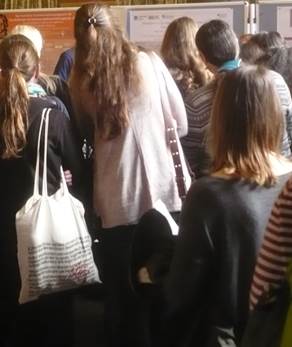 Fortunately, new therapeutic approaches and evaluations of existing concepts were presented here (completely apart from ABA-based or apart from behavioral therapy procedures at all):

For example, there was a poster contribution about intervention with the help of “integrative theater groups for children and young people with ASD”.

Another poster informed about the positive results of TüTASS, a body- and emotion-based group training from Tübingen for children.

Another described the concept of an autism competence group for adults with ASD and mild intellectual disabilities (AutKom).

We found the panel discussion very problematic and counterproductive, because there were hardly any contradicting opinions that could be discussed, with the exception of Anne Häußler (graduate pedagogue, graduate psychologist, TEACCH) with Claus Lechmann (graduate psychologist, ATZ Cologne), Günther Stratmann (FA for child and adolescent psychiatry, Palatinate Institute Klingenmünster and member of ABA Germany eV) and Karoline Teufel (graduate psychologist, early intervention program A-FFIP) only sat on the podium for people who use ABA or who incorporated many elements of it into their therapy concept to have. Unfortunately, the audience received information almost exclusively about ABA, but not about the many alternatives available.

Mr. Stratmann named "intensive trial teaching" (ITT) as an essential component of the ABA therapy and that this program did not correspond to the "motivation of the child".

This caused corresponding irritation in the audience. Irritation also arose because critical questions were partially or not completely answered.

For example, one of our representatives asked about the long-term effects of the therapies and whether autistic people were asked for their opinion on these therapies. He mentioned a drastic case in which treatment with ABA was unsuccessful or counterproductive in the long term. Another participant in the audience asked whether ABA would not also be misused so that parents, contrary to their wishes and needs, induce the child to establish or tolerate physical contact.

The answers to these questions were unsatisfactory. Mr. Lechmann even explicitly mentioned in his remarks that the parents are the main clients of the therapies.

Interestingly, two hours earlier, Prof. Christine M. Freitag had given her overview lecture “Therapeutic approaches in early intervention“Reveal clear doubts about these so-called“ discrete learning formats ”, in which in a 1: 1 format 40 hours a week predetermined programs are strictly worked through in small steps and which go back to Lovaas. These therapeutic approaches would not have led to an improvement in the autism-specific symptoms.

We at Aspies e.V. were very annoyed about this "ABA burden" of the panel discussion. Because even if Ms. Häußler and Ms. Teufel were present in the panel discussion, who also use other therapy and support approaches, there was basically no contradiction to the presented and propagated methods and techniques based on ABA. We passed the criticism on to the organizers of the WTAS.

* A little anecdote: One of the ABA representatives himself attracted attention at Aspies eV for his “challenging” behavior when he first placed his water glass next to a pile of our flyers during the break (and wet the top sheets) and later put his empty, dirty paper plate directly on our information flyer. One of us reacted to him "promptly": "We will probably have to use aversives there 