Andrew Whitworth is a Hall of Famer

The team of the decade 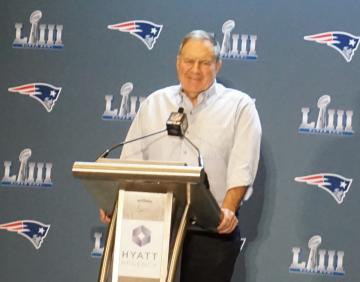 The NFL has announced its "All Decade Team" for the years 2010-2019. The 55-man class (53 players / 2 coaches) was elected in the last few weeks by the 48-person selection committee that is normally allowed to determine the members for the Hall Of Fame.

The division with the most players is NFC West, which has nine players from the four teams. Most of the team members are the Seahawks (Bobby Wagner, Richard Sherman, Earl Thomas, Marshawn Lynch and Coach Carroll) and Patriots (Tom Brady, Stephen Gostkowski, Rob Gronkowski, Logan Mankins and Coach Belichick).

Belichick and Brady were already in the "All Decade Team" from 2000-2009, as were Kick Returner Devin Hester, Punter Shane Lechler and Defensive End Julius Peppers.

The election as "Coach of the Decade" could actually have made Bill Belichick smile again ... (© Carsten Keller)