George Lucas is a great writer

Yesterday “The Franchise”… and tomorrow “Yesterday”?

Several people wrote to me today who saw the trailer for Danny Boyle's new film “Yesterday”. Tenor: “Am I crazy or does it remind me of the short story‘ The Franchise ’?”.

Of course, I watched the trailer straight away and had to grin. Because I liked the idea very much, and maybe because you can actually see a certain similarity to “The Franchise”. Although the makers of “Yesterday” have certainly never heard of my story and the script writer Richard Curtis is, on the contrary, someone who already had a lot of great ideas, most recently with “It's all a matter of time”. 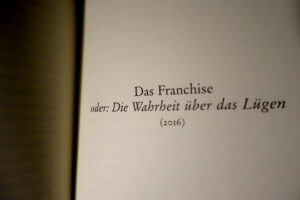 (The story of “The Franchise” in short: An unsuccessful screenwriter and contemporary film nerd ends up absurdly in 1973 - where no one has yet Starwars knows. He now has four years to steal George Lucas' idea and trick his way through Hollywood in the process ...
The short story can be found in the anthology "The Truth About Lying.")

For me it is more of the nice case where several people had similar thoughts. "Yesterday" is like the negative of "The Franchise" here. Once the world forgets something and only one person can remember. In the other case the world has not yet discovered something and someone has brought their knowledge with them from the future. What both stories have in common, however, is the question: What if you were the only person to have this secret knowledge of the worldwide success of something - and to pass off an alien creation as your own?

When I came up with the idea for “The Franchise”, it was right with the making of Starwars connected. Back then I read in a book how this biggest film franchise in the world came about by chance, how many jumps George Lucas' imagination made in it. In 1973 he seemed to have come very close to the final story, by the end of 1974 his designs were miles away from it again. I thought: How mean it would be if someone had come along who had already seen the finished film: Nobody would believe Lucas as long as his Han Solo was still a green alien and the plot was so confused, while my thief was already with the superior one , finished story arrives. But, as a stranger, could you even repeat this success?

The setting of the 1970s and New Hollywood also appealed to me: Kubrick, Coppola, Scorsese, Lucas, Spielberg - all young and determined to change cinema forever….

At some point I paused and wondered if it was good to look at myself like that Starwars to chain. After all, the possibilities of the time traveler would be unlimited, I let my character Adrian Brooks, for example, philosophize about what it would be like to buy Apple shares or art early on. Once he says: "One of them might have stolen Michael Jackson and used melodies from hits himself ..."

Which means I would have missed “Yesterday” by a hair's breadth. But I stayed with it Starwars and I'm happy with it because I was able to tell the story in a more unconventional way. Instead of love, it is all about the creative duel between the true creator of an idea and a thief who would like to take it away from him without scruples. And what consequences that would have for the film world.

By the way, the whole thing reminded me of my twenty-one-year-old self, who one night looked unsuspectingly at “Hot off the press”, where an interview with Cornelia Funke was announced - which I had heard of but didn't know about. At the time I was writing a trilogy of which my test readers said: "Forget the book with the teacher, this Beck's last thing - you have to write THAT HERE." Then came the interview with Funke, in which she talked about her Inkworld books - and I was done.

It was almost the same idea, I gave up mine that night. Only now am I slowly playing with the idea of ​​maybe going back to this trilogy after all.