What is the dairy sector in India

India's milk market: In the competition for the customer

The current debate shows that the losers in milk market policy are all farmers - worldwide. The MISEREOR partner organization “The Food Sovereignity Alliance” (FSA) in India has been informing Indian farmers and consumers about the consequences of an export-oriented agricultural and trade policy and the growing influence of large corporations in the dairy industry since the beginning of the year. 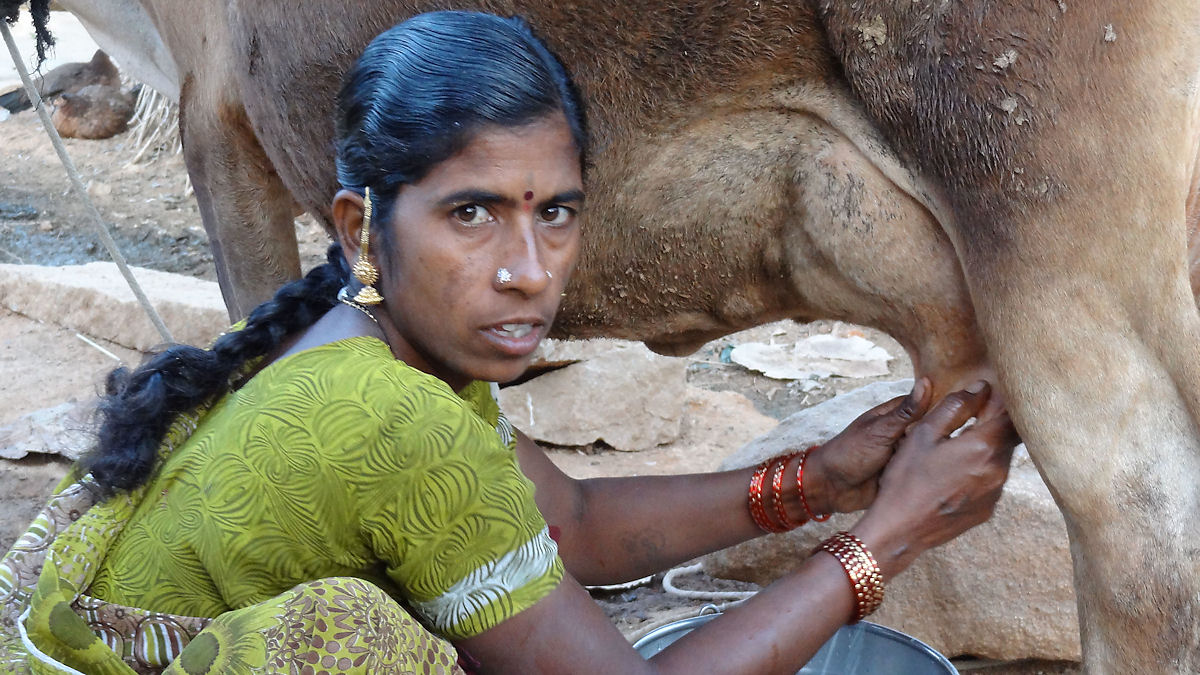 Small milk producers supply around 90 percent of the milk market in India. © MISEREOR

In October the alliance met with other organizations such as the South Indian Coordination Committee of Farmers' Movements (SICCFM) and the Tamil Nadu Women's Collective in Chennai in the Indian state of Tamil Nadu to discuss the ongoing milk crisis and the upheaval in India The milk sector and its consequences for small producers, the so-called “invisible” milk suppliers.

Because: India in particular is known for its tradition of decentralized milk production. In both rural and urban areas, dairy farming families produce milk, yogurt, butter and buttermilk for local markets. With their milk they supply around 90 percent of the Indian milk market. In poor households, individual dairy cows make a significant contribution to the nutrition and income of the families. One example are the Maldhari shepherds from Maharashtra: largely "invisible" to government authorities, they produce high-quality fresh milk at comparatively low prices. The Maldharis have developed a sophisticated system of relationships with their environment - they buy residues from the sugar and popcorn industries to feed their animals and sell their milk to local tea stalls in front of factories, at candy stores or right on the doorstep.

A dairy market in upheaval

But the decentralized supply of the Indian milk market is increasingly in danger: Introduced by reforms in the context of the WTO accession negotiations in 1992, state control of the dairy sector to protect cooperatives is increasingly being lifted. The state privatization of areas such as breeding, feed delivery and veterinary care also generates high production costs that many poorer livestock keepers can no longer afford. The increasing marketing of packaged milk in supermarkets is gradually displacing the buffalo milk originally preferred in India by small farmers and shepherds, and high hygiene standards are further barriers.

“A price war has broken out between cooperatives and private dairies in the competition for customers,” explains Sagari Ramdas, founder of the FSA during the meeting. In urban areas in particular, companies are increasingly undercutting each other with milk prices; Purchase prices well below production costs drove small producers deeper and deeper into debt. To compensate for the low purchase prices, Indian dairy advisory services are promoting productivity increases, but only a few dairy farmers can afford the higher production costs or take the risk. The maxim “grow or soften” has thus also reached India's dairy sector. "Indian smallholders, the backbone of our dairy industry, are hit hardest - they are bearing the consequences of structural change in the Indian dairy sector," said Ramdas.

To the Food Sovereignity Alliance

The MISEREOR partner organization Food Sovereignty Alliance was founded in 2013 as an exchange platform for food producers and consumers with the aim of anchoring plans to secure food sovereignty at the local level: on the one hand, to promote sustainable, diverse and fair agriculture and, on the other hand, to control the food together with responsible consumers to win back your own food system. At the annual “food summit” of the Indian network, topics such as biotechnology, traditional seed diversity or the expansion of industrial agriculture are on the agenda - in 2015 the main focus was on land rights issues in connection with the food industry.

MISEREOR conference on “Enough? Fair? Healthy? Global Agricultural Markets and the Future of Local Food Systems ”on November 26, 2015 in Berlin